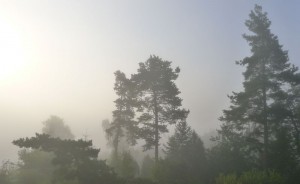 Mist from the seaside clearing up in the morning. Orust island. Sweden. Photo: Lasse Johansson

Morning mist is rolling in from the shore, the remnants of a rainy summer night. Elusive, yet being so close that one can nearly touch it. The sun finally breaks through, clearing up the mist into vapour, and it is gone, the remembrance of the night’s thunderstorm. Mist, the symbol of the unclear, the undiscovered, out of which discovery is born. Does it still hold any mysteries?

The scientists Peter and Neal Graneau were facing an enigma. In their exploration of forces in electrical currents, they had come to study the dynamics of what they called water plasma explosions. Actually, what they were studying was very similar to a process going on every day in the atmosphere, a thunderstorm. High currents, several thousands of times stronger than what passes through an ordinary light bulb, would pass a small vessel of water, breaking down the normally insulating water, disintegrating the water into fog and water droplets, while emitting white light.

The water jet expelled from the vessel would easily punch a hole through a piece of metal in its way. A pressure of more than twenty-five thousand atmospheres could be measured. No wonder thunderstorms have such power.

But it was when they started to measure the energy released by the water plasma explosion that the mystery really begun. The energy released seemed to exceed the electrical energy that was put into the water. After having repeated the experiment in several ways they were forced to conclude that water seemed to store some kind of unknown energy.

But how was this possible? Perhaps, they speculated, molecular binding energy was released when water was transformed into fog droplets in the arc explosion, pushing water into a lower energy state. If so, it would take more energy to convert the fog droplets into vapour again – a job done by the solar radiation, causing the water to enter the water cycle, closing the loop.

Consequently, a new kind of renewable energy source could be explored – solar energy from water.

However, to this day we do not know the answer to the riddle, as the water research of the Graneaus has largely been ignored.

These results have recently been replicated and expanded at the Wetsus institute in the Netherlands:

A description of the first water arc explosion experiments:

This phenomenon will of course also have implications for how we look at thunder and its energy balance. Peter Graneau speculated many years ago that electrodynamic processes may be a neglected factor in causing thunder, i.e. that thunder is not just caused by thermal expansion of air being heated by lightning.