Posted on January 1, 2013 by Lasse Johansson 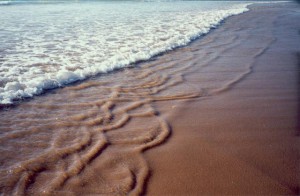 Self-organizing, seemingly out of nothing, the sand-water rolls appear. Where did they come from? The mo­ment before, when the incoming stream reached its highest level and turned, there was only a flat surface of murky water.

Self-organization means the sponta­neous formation of a macroscopic structure, an order for free, as it were, emerging when the effects of the individuals, e.g. the movement of water molecules, start to interlock and add up, forming a new complexity. When the conditions are right, self-organization occurs, spontaneously, like a vortex forming in a bath tub. It was the Belgian scientist Ilya Prigogine (1917-2003) who pointed out that systems through which energy flow, far from equi­librium, typically give rise to self-organization.

As an opposite kind of system, we could consider a bottle with hot water in a closed dark room. As the bottle cools down, it reaches equilibrium with the ambient temperature of the room. The system will then be at rest.

If we look around us, we can see that the world is full of self-organizing sys­tems, even systems that we do not normally consider as living. By studying self-organizing systems, we can learn something about what is the foundation for a living system. To say that something is “alive”, we would need additional criteria, although an exact definition of “alive” still evades us.

But let us for a moment leave our preconceived ideas of life and look at the more general “proto-alive” self-organizing systems that we can see around us. The hydrological cycle – where water evaporates from the sea, forms clouds, falls as rain, infiltrates the ground, and flows into rivers that, eventually, flows out into the sea again – is one such system. A kettle with hot water on the stove, forming convection patterns in the water, is another example in a much smaller and less complex scale. Although we may just casually note that the simmering water is ready for the teapot.

Here is another system: sand-water rolls on the beach. They have the advantage of being in our own scale, and thus easier to observe. At Agadir beach in Morocco, the streams cause the water level to oscillate. During a couple of minutes the water level rises about 50 centimetres, only to fall again, over the next few minutes. This oscillating flux, in combination with the soft sand at the beach, constitutes an ideal ground for the sand-water rolls to emerge.

The interaction of the sand and the water forms a dynamic system. The shore becomes part of the flow, and the flow shapes the shore. Together they form the macroscopic sand-water rolls.

Always changing – always being recognizable as the same phenomenon. That is the essence of self-organization – that is the heart of life.

This essay was born out of my research on water flow and complexity in 1994-1997 together with Curt Hallberg and Morten Ovesen at Institute of Ecological Technology.

Read more about it, and a discussion of Prigogine’s criteria for self-organization in relation to the spontaneous formation of vortex flow in water, and some applications:

A presentation with focus on self-organization processes in water – with examples on e.g. vortex formation, sand-water rolls etc. which summarizes the above research (contains some nice images):

Introductions (from the source) to Prigogine’s criteria for self-organization processes: