Water’s inherent tendency to form patterns can be observed as simple as with ink droplets falling into water (preferably in a container with flat walls). The impact of the droplet creates vaulting toroidal forms, vortexes resembling jellyfish, and finally, when the motion slows down, settles into sinking octopus-like forms.

Studying and looking at the flow patterns can be really captivating. I once tried this experiment with children in kindergarten, who were amazed, and would stand dripping ink into the water for more than half an hour. 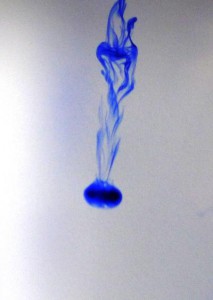 Impact of an ink droplet, toroidal head with a screw shaped trailing vortex.

It is a lesson from modern research into chaos theory and complexity that we can learn from apparently very different systems, that their behaviour on a fundamental level may be related – even if the actual processes are very different. The droplet flow image has evolved into a jellyfish-like structure.

Looking at the forms, sometimes a real connection through the underlying dynamics can be hinted – at other times our imagination may recall images of forms not seemingly related to water species at all. Stretching our imagination, we find that some of the resulting ink curtain images (e.g. the image to the right) may resemble other organic forms, sometimes limbs of vertebrates.

Here we meet the elusive boundary between what is form and what is the interpretation of our perception.

Connection or coincidence? Well, such is the process of discovery, that we never know the latter for certain.

More about ink droplets and water species can be found in D’Arcy Thompson’s classic exploration of the transformation of organic forms:

The book is also available in an abridged and edited version (about a third of the original 1116 pages):

A brief intro to D’Arcy Thompson’s research can be found at:

For a less mathematical and more philosophical approach, have a look at Theodor Schwenk’s classical book on water movement. It focuses on the dynamical movement and pattern formation of water, and has a chapter on ink droplets: