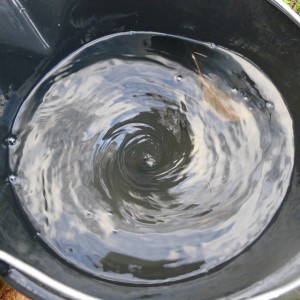 Water swirling in a bucket, with reflections of the sky in the water surface. A leaf is going with the flow.
Photo: Lasse Johansson

Round and round, the vortex swirls in the bucket, mixing whatever is in it. Perhaps one of our most mundane acquaintances with water is stirring it, although we seldom give the process a closer look. Stirring vigorously will only create a blur. But the moment we leave water on its own for a while, the curved spiralling shapes appear and stabilize. The vortex funnel has chosen its preferred form.

Does water mind how we stir it? Will it behave differently afterwards depending on our movements? Looking at water merely as a dead substance, we tend to relegate such questions to the fairy tales. But even a fairy tale can turn out to be true. And in this case – just as a good fairytale should – it is about a land down under.

When the dry spring and summer months are over, and the first rains have fallen, a mist of water droplets can be seen drifting over millions of acres at night time in Australia, as the biodynamic farmers prepare the soil for the spring.

Spraying the fields with a brew created by mixing in lumps of clay into water, vortexing the dilute solution by hand, had been practiced by farmers in the Alps in the 19:th century. A farmland sprayed with such a brew was considered not to dry out even under adverse conditions. Then, in the 1920s, the biodynamic movement, born out of an initiative of Rudolf Steiner, joined in, with a practice of stirring specially composted manure into water, in a rhythmic pattern, one way and then the other, on an on for an hour, thus creating a biodynamic preparation, a dilute form of compost tea, and spraying it onto the fields. Very dilute, just a few grams of compost for each litre of water. Just a fine mist, less than a teaspoon of water on each square metre of farmland.

Originally stirred by hand, the process then developed into stirring machines: creating a vortex, then automatically reversing and stirring again until a new vortex forms, a cycle of vortexes, each lasting perhaps 30 seconds. Now the flowforms have entered the game, replacing the machines, being more gentle to the process than the mechanical machine, and having more endurance than the stirring hand of man.

Recognized as a strict, although somewhat obscure, form of organic agriculture, biodynamics had been practiced in small scale and had spread over the world since its inception. But it was in Australia, on some of the world’s most fragile soils, that the practice would really take root. Introduced by Alex Podolinsky in the 1950s, the biodynamic movement in Australia has grown to be practiced on more than 2 million acres (800 000 hectares) of farmland, an area equivalent to 30 per cent of the agricultural land in Denmark.

Its large scale conversion of gravel like one inch deep topsoil, unworkable hardpans and overgrazed pastures into lush organic vegetation with deep draught resistant soil has been described by fellow Australian farmers as “just plain miraculous”. According to Alex Podolinsky, the biodynamic preparation affects the soil’s ability to keep the moisture during the long dry season, by giving the soil a more colloid structure, taking better advantage of the little rain that falls in the rain period.

Whether it is the effect of the organisms and fungi in the very dilute compost tea, or some unknown catalytic effect on the soil ecology by the vortexed water, creating conditions for a new soil ecosystem to emerge, the results truly speak for themselves.

Read more about the results obtained in Australia in a lecture given by Alex Podolinksky at Forschungsinstitut für biologischen Landbau:

Resources on biodynamic agriculture in Australia:

For an introduction to compost teas in general, see e.g.: