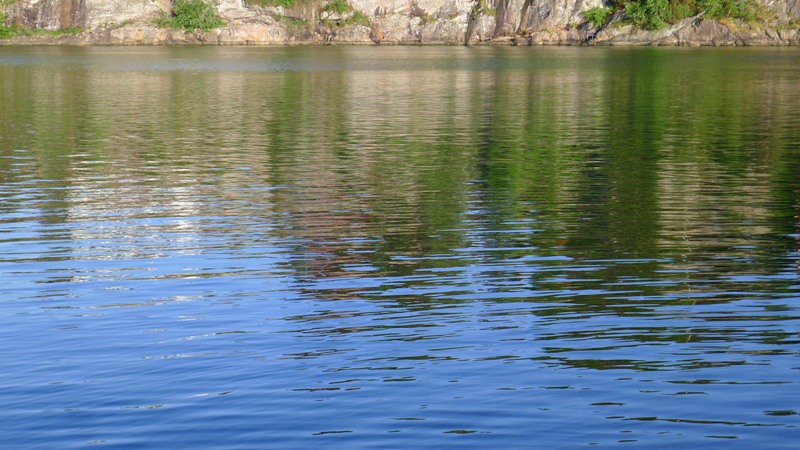 Reflections in an undulating water surface, stretching in the vertical direction. Slussen, Orust island, at the west coast of Sweden.
Photos and illustrations: Lasse Johansson

A patchy green stretches down from above, creating a striped impression on the ever moving canvas. The sienna coloured rock walls blend in between. To the left, a whitish patch. The reflection from a cottage above, here shimmering elongated as if made of tall rolls, like a faint fairytale castle, its towers dissolving into the blue. As the water surface approaches me, the sky embosses the lower part of the image and finally fills it.

In a flat mirror, a small object is seen reflected only at a single place in the mirror. All other rays from the object reflect away from the observer. The observer is at left, the object at right.

Travelling across the scene, in a flat mirror or in still water, a small object is seen reflected at a single place in the mirroring surface. Only where the angle towards the eye matches the angle to the object in the mirror, an image of the object appears, as only then its light reaches the observer. All other rays extending from the object to the water surface reflect away from the observer, never reaching the eye. Then the image is clear and crisp.

In a wavy mirror, the same object can be seen reflected at many places in the mirror. Looking farther and farther away, the object is reflected more and more at the front of each wave – the reflecting plane becomes more and more inclined.

In a wavy mirror, when small undulations in the surface exist, the equal angle will be satisfied on many waves en route to the observer, causing the object to multiply in the mirroring water surface.

Looking away from the point where the object was seen crisply in the still mirror, the object is reflected more and more at the front of each wave, as the reflecting plane matching the condition of equal angles becomes more and more inclined for every wave, until the light becomes obscured by the wave in front, or meets the point of sharpest inclination at the middle of the front hill of a wave, after which there are no more reflections of the object on waves behind.

Each wave creates its own small image, the highest objects within reach being reflected at the front of the wave, and the lowest at the rear.

Each wave top creates its own small image, the highest objects being reflected at the front and the lowest that are within reach at the top. Line after line of blended images, one in front of the other, form the floating fuzzy image. Thus in between the crests, the sky paints blue lines, becoming more and more pronounced, until they dominate at the image at the bottom.

Large objects, which can be thought of as having many small parts, each being multiplied, appear smudged out. Blending in and blending out, the boundaries of the large objects overlap considerably. 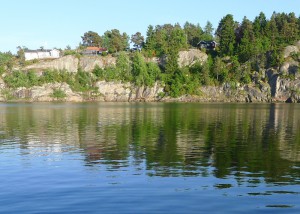 The world above the mirror revealed.

As a result, the vertical structures dissolve and blend, their lengths being stretched and unreliable. The horizontal distances between the stretches remain reliable, although between what they mark the distance can now hardly be discerned. The horizontal lines in the motive have been smudged out, leaving only the verticals for the observer to enjoy.