Posted on September 1, 2014 by Lasse Johansson 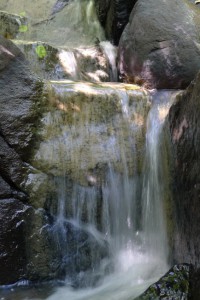 Breathtaking, the falling water rumbles down in front of me. At one place a metre or less, at another place cascading from so high above that I cannot estimate it. Moving with all its forms, and yet remaining firmly at the same place. Peaceful in all its turmoil.

Suddenly the light glimmers at the top of the fall, the rim surrounded by a blueish light from the reflected sky above. Thin hairlike reflections, as if traced out by a pointed brush, shifting –  now here, now there, now dissolving in the general turmoil further down.

In a side stream, small leaves are bustling down, quickly, cascading in a little flume ride from precipice to precipice.

Standing below the waterfall, just letting the senses absorb it all: the murmuring sound, the falling splashing sheet of water, the vibrations in the ground. And, just like after a heavy rainfall or thunderstorm, surprisingly refreshing – but why? 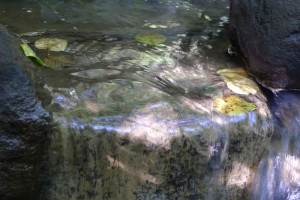 The water at the rim reflects a blueish light from the sky above. Photo: Lasse Johansson

A small clue can perhaps be gained from the research of the German physicist Philip Lenard (1862-1947). In 1892 he noted that the existence of electrical fields around waterfalls had been long known, but that the reason for this was unclear. Through a series of experiments with falling water, he found that when falling water splits into drops, a charge separation occurs in the water, with the positive charge going with the larger drops and the negative charge going with the smaller drops. The smaller drops are carried away by the wind, making the air charged with an excess of negative charge (electrons). The effect is particularly strong if there is an upwind, separating the small droplets rising with the air from the larger falling ones.

This would create a situation resembling that of a thunderstorm, although a bit milder. And in 1927, the British meteorologist George Simpson (1878-1965) developed the breaking-drop theory to explain how thunderstorms build up their charge, using the same charge separation effect as the waterfall does. And although the exact details of generation of large charges in thunder clouds are still not well understood, the splitting of water drops accounts for at least some of the charge.

The washing out of dust by the rain, and the electric charging of the thunder creates an atmosphere filled with charge. Such charged air has been associated with a sense of freshness in the air, and has been used to ameliorate wound healing processes and reduce pain in medicine. Oppositely, some atmospheric phenomena, like the dry Föhn wind (practically devoid of charged particles), have been associated with a sense of being more difficult to breathe.

Here you can read more about the Lenard effect and Simpsons breaking drop theory: