Posted on February 1, 2014 by Lasse Johansson 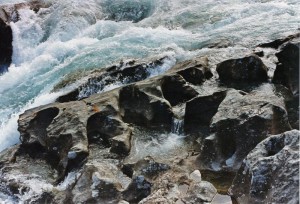 Natural flowforms in a small side stream beside the main current of river Sjoa. Over time, water has carved the rounded forms, aided by the occasional boulder. Here they express a rhythm of their own, with water dancing from pond to pond. Sjoa, Norway. Photo: Dag Birkeland

Powerful, the mass of water is rushing past me, a white blueish foaming torrent. Confined between the towering stone walls in the gorge, the river here has acquired a relentless quality, thrusting forward unstoppable.

Making sure that I stand on firm ground, I observe it. Falling into the deep river here, one would be lost, immediately being taken into the depths by the strong fraying currents. Here a man’s power matters little.

By the side of the river, something captures my attention. A little stream has broken out of the main course, flowing in a small series of ponds, each pond being carved in stone by water itself, over how long time I cannot imagine.

Here water dances, swinging from one side of the pond to the other, at a rhythm that is clearly discernible, pulsating from pond to pond. Then I realize: it is a natural flowform – remembering the dancing water in the flowforms of stone, designed by the British anthroposophist John Wilkes (1930-2011). But here, it is nature that is the master designer. Carved by water, year after year, water itself has shaped the form it chooses to follow, aided by the occasional boulder. 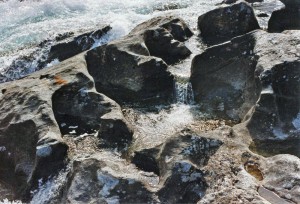 A pulse, swinging from side to side – the stone walls and the water form a resonating circuit. Together, the flow and the carved walls define the pulse of water.

Filling up towards one side, it decides that the cup is full, and starts to swing over to the other side, pulse after pulse. For some time, I stand enchanted, following the flow, from pond to pond. Gentle it seems, the rounded forms convey a sense of tranquility.

Looking up, I become aware of the turmoil around me. Two different worlds, brought together. Here they lie, side by side, the relentless power of the foaming river, carrying the main current, and the gentle dancing water ponds, the natural flowforms. A stark contrast of the different temperaments of water.

Read more about Ridderspranget (includes a map on how to get there):

More information about flowforms can be found in John Wilkes beautifully illustrated introduction to flowforms:

Research on flowforms is ongoing at Foundation for Water (Formely: Healing Water Foundation), a research foundation set up by John Wilkes: