Posted on October 1, 2014 by Lasse Johansson 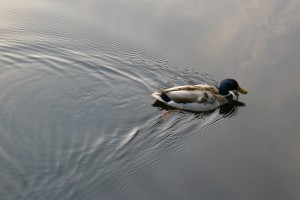 Wild Duck (Mallard) swimming across a water surface, generating a wake behind it. Small waves can be seen capturing up with the main wake, overtaking it, and then dissolving as they advance ahead and loose their energy. Söderåsen National Park, Sweden.
Photo: Lasse Johansson

Quietly, the duck swims across the water surface, its legs paddling silently underneath. Behind it, a small wake spreads distinctly, disturbing the otherwise completely still water surface. The sun is setting over the little lake – the oblique light causes the ripples to stand out, bringing them to my attention. Here at the outlet, just above a small dam, pieces of pond weed come drifting in an almost invisible current, and the duck hunts for food.

Crest after crest forms behind the duck, a wavy pattern spreading slowly,  and widening. In the still water it looks like a series of small circles, one behind the other, spreading, and as the circles spread, they are slowly being erased behind the duck. The wake, though consisting of many small crests moving on their own accord, retains its own structure. The angle of the wake is best observed from a bit of a distance. Photo: Lasse Johansson

As the wake falls behind, it forms an angle. A boat, moving at sufficiently deep water, gives off the same pattern, universal it seems. Curiously, the angle is always the same, approximately 39 degrees, independently of the speed, if the water is sufficiently deep. For a sailing boat crossing a bay, or a large vessel in the midst of the ocean, it remains the same, a fact first proved by the British physicist William Thomson (1824-1907) – who is more known as Lord Kelvin – in 1887.

Moving slowly, the waves have freed themselves from the bottom, which is lurking in the depths. Unhindered by whatever is below, they keep their universal characteristics.

By looking intently at the surface, small individual waves can be seen catching up with the main wake, merging with it for a moment, and continuing ahead, losing their energy and disappearing. Small rings spreading with half the speed of the duck, carrying the main impetus of the waves. Where they overlap, the angled wake can be seen.
Photo: Lasse Johansson

The main impetus of the waves is slower,  looking like a distinct series of rings, moving with half the speed of the disturbing object.  Where the rings overlap, the angled wake can be seen. The wake is acting much like an entity of its own, despite being built by numerous small waves, coming and going, one by one. And it is persistent. In theory, it can stretch back as far as half the distance the ship has travelled, although in practice this can be difficult to actually see. But looking behind a large ocean vessel from the air, the wake can be seen for miles and miles.

Only when the motion of the vessel is fast compared with the depth, the waves sense the bottom, and start to fall back, the angle becoming narrower and narrower, the more shallow the water seems to the advancing wake. A motor boat cruising at 30 knots may start to feel the bottom at a depth of 50 metres or so. But for the duck swimming at a metre per second, two metres of water is deep.

The wakes forming in water after anmials and ships can be easily observed in any pond, or at the beach. For a nice discussion on wakes and how they change in shallow water see chapter 17 in:

For a more detailed and mathematical discussion of stationary waves with Kelvin’s method, see chapter 8 in: