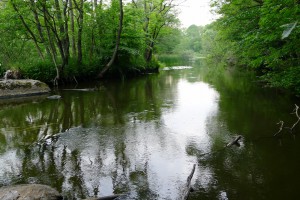 Branching in the river Rönne, Sweden. To the left a small island has formed in the river. Photo: Lasse Johansson

Under the trees, the river flows silently. Meandering in the shade, the water looks dark and cool. As the eyes get used to the dim light, the dense undergrowth can be discerned at the banks. Slowly, the canoe drifts along, the banks of the river come to meet, and then fall away behind.

Now a small overgrown bank appears, dividing the river for a moment, quickly followed by another. The branches of the grey alder trees reach down to the river surface, almost touching it. After a turn, the river broadens somewhat, and a small archipelago opens up. The sun glimmers at the centre of the stream. A branch divides to the right, flowing for some 50 meters, then joining the main body of water again. After a while the river seems to narrow again, making a left turn, now flowing as a whole again.

What causes the branching of the river?

When a river flows it has a certain capacity to carry sediments with it. Along its route it will, depending on the conditions, carry the sediments on, deposit them, or erode more material to carry away. The motion of the water, particularly its speed, determines the carrying capacity.  But other factors may affect the flow pattern, and thus the river morphology.

The Austrian forester Viktor Schauberger (1885-1958) pointed out how the relation between the temperature of air, water and river bank would affect the flow pattern of the river, and in the end the river morphology. Together with his son, the environmentalist Walter Schauberger (1914-1994), he developed the following image: 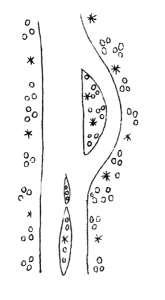 Shade generation from trees at the banks and islands of a river. As the river widens, it develops islands and side branches to preserve its shade, self-organizing into a small archipelago. Illustration by
Olof Alexandersson

As the river widens, the cooling effect is lost, the water surface is heated up. As the flow is heated up, the flow pattern  of the river alters, and the river’s ability to carry sediments diminishes, causing sand banks and small islands in the river to be formed.

Soon grass and small bushes have discovered the sand banks. The small vegetation after a while gives ways for the water-loving trees. The shade of the trees and their roots start to cool down the flow, altering the flow patterns, thereby increasing the transport capacity of the flow. The deposition of sediments slows down. A kind of dynamic equilibrium has been established between the water flow, the sediment transport, the bank formation and the cooling vegetation, all forming a kind of ecosystem, structurally stable when left to its own. A small archipelago has emerged.

Then, Schauberger observed, man intervenes, cutting down the trees, removing the overgrown sand banks to “clear up” the river for the boats,  straightening the bends. The cooling effect disappears, the flow patterns are altered, and the sensitive dynamic equilibrium of the ecosystem is destroyed. The river starts silting up, only to give the dredgers eternal work opportunities.

The following lecture by Walter Schauberger summarizes his view on the co-operation between river flow and vegetation and its inherent self-stabilization:

The Institute of Ecological Technology has an ongoing research programme on areas related to Viktor Schauberger. See particularly the area Alternative water flow:

The Schauberger Family Trust has an archive with many publications of Viktor Schauberger and Walter Schaubeger: