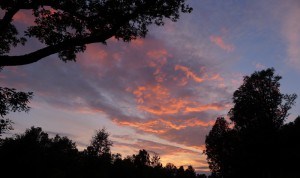 Water in the sky (clouds) reflecting the power from the sun that feeds us all. Sunset at Fredensborg, Sweden. Photo: Lasse Johansson

“It is junk science”, their adversaries would say. And with a decision ruled beforehand, there was really no need to examine all the intricacies in detail. The electrochemists Martin Fleischmann (1927-2012) and Stanley Pons (1943-) had, in a long series of experiments, observed heat production from electrolysis of heavy water with a special electrode made of palladium. The energy released far exceeded the electrical energy that was put into the experiment. Having examined possible sources of the energy, they had come to the conclusion that a nuclear reaction was going on, and the effect was dubbed “cold fusion” – an effect promising clean and unlimited energy from water.

Soon after the publication of their results in 1989, the matter evolved into scientific controversy, with accusations of fraud and incompetence haggling. The effect would be impossible, the opponents argued, referring to the extreme temperature required to fusion hydrogen nuclei in a “hot fusion” experiment mimicking the processes in the sun. Such fusion would also produce deadly gamma radiation and neutrons. But in Fleischmann & Pons’ experiment, no gamma rays or neutrons were observed.

An electrical current would split water into oxygen and heavy hydrogen. The latter would migrate into the palladium electrode and become part of the densely packed crystal lattice. And it was inside there, ostensibly, that the nuclear reactions would go on. The experiment also produced small amounts of helium (which would be expected if heavy hydrogen nuclei fused), some palladium was transmuted into neighbouring elements, and, most significantly, no radioactive radiation was detected.

Many had difficulties in trying to replicate the experiment and would write off the results as experimental errors. Only when the waves of the controversy had subsided, some of the essential criteria for success were identified:

E.g., it would take a first rate electrochemist to pack sufficiently many heavy hydrogen atoms into a palladium lattice for a reaction to occur – typically one atom for each palladium atom. Mastering that kind of intricacy was what Fleischmann & Pons excelled at. Yet, most who tried to replicate their experiment had a background in nuclear physics, and not in experimental electrochemistry.

Also, the solution should have a certain temperature, 70 °C or more. Yet, many who tried to replicate the experiment tried to measure the heat generation by cooling the cell to 20 °C, by a cool water flow surrounding cell, thus effectively preventing the effect to appear.

And some unknown property of the palladium material was critical, as some samples worked reasonably replicable, and others not. (A situation resembling how it was at the birth of the semiconductor industry, before one had learned how to grow the right kind of crystals.)

Since then, dozens of scientists have replicated the effect, yet the results are still ignored and even ridiculed as being impossible and against the laws of nature. But would they be?

Having two hydrogen nuclei colliding at high speed in vacuum is after all a very different situation from having them densely packed in a lattice of palladium. In the latter environment, the atoms no longer can be regarded as independent; they can contribute and act collectively, as an undivided whole. An example is phonons (e.g. sound vibrations) in a molecular lattice, where all the atoms act together as a “periodic potential”, creating a collectively exited state. Now, if a fusion reaction occurs, the excess energy produced from the fusion reaction no longer needs to be radiated away as gamma rays, having nowhere else to go (which is the case in vacuum). If many atoms share the released energy, the energy absorbed by each atom will be in the range to create a vibration. And what happens when the vibration is propagated through the medium? It gets dispersed and becomes what we call heat vibrations. And that is precisely what is observed in the Fleischmann & Pons experiment. Heat – and no gamma rays.

Maybe we should reflect on the words of Michael Faraday, who once observed: “Nothing is too wonderful to be true, if it be consistent with the laws of nature; and in such things as these, experiment is the best test of such consistency.”

Twenty five years after the first experiments by Fleischmann & Pons, and despite what must be called an overwhelming amount of experimental evidence, the scientific community at large has failed to embrace this phenomenon.

Since 1989, many other configurations than the original experiment have shown to produce excess heat and transmutation products – e.g. electrolysis of ordinary (light) water with nickel electrodes, experiments with deuterium gas being absorbed into palladium, glow discharge of deuterium and hydrogen gas (absorbed into various metals) etc.

A good general overview of the field (covers research up to 2002) is:

A more recent (brief) overview is:

Some of the early experiments (including Fleischmann & Pons original paper) producing excess heat:

Some early papers on experiments detecting transmutation products and helium: