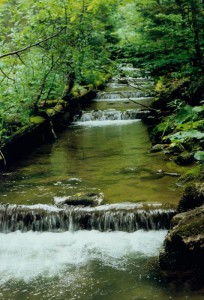 Part of the Taschlbach stream as it looks today, in the Freinbach area, Steiermark, Austria. Photo: Olof Alexandersson

The first section of the system had recently been completed in the Taschlbach stream, a wild and unruly river, not much larger than a brook.

By the side of the stream, 200 m3 of winter hewn larch and beech tree logs, each of them four to six meters tall, lay ready for transportation. In this chilly morning at the end of April 1927, the untamed brook, meandering away from the specially redesigned dam which had just been finished by Schauberger’s workers, would have to prove itself as a means for timber transport.

It was a very definite test. If failed, it would make it possible for his opponents in the forestry administration to finally get rid of the troublesome forester with his unconventional ideas.

Yet, within slightly more than half an hour, all the timber had floated all the way down to the river Mürz, four kilometres downstream, and a couple of hours later, the first logs started to arrive in Krampen-Neuberg, having travelled more than 24 kilometres. The timber commission was completely dumb-founded.

After more than two years of constant combat against the opinions of the forest engineers, Schauberger had proven his case. His opponents’ position, that his methods of timber transport and river engineering were either long known or useless, was no longer possible to uphold.”This success nobody can take from me”, he later wrote.

The battle wouldn’t end there though, but the Krampen-Neuberg timber floating system, when finished two years later, would be described as an engineering wonder in the press.

Later he would describe his methods in more detail, as well as his principles of river engineering. The idea was to use the intrinsic movements of the water. By mixing water from different layers in the dam, the released water would get the correct temperature in relation to the air and the riverbed downstream and would create the right kind of flow, keeping the timber centred at the stream.

A special arrangement at the floodgate would allow water from a chosen cross-section of the dam to be released into the stream below. This, he had realized several years ago, was the essence of the solution. To let water of the correct temperature be released from the dam, to create a flow that would spontane­ously organize, self-organize we would say today, into the right flow pattern.

Axial rotation from the shores towards the centre of the river. By Morten Ovesen.

The secret was to create conditions for an axial rotation of the flow from the shores towards the centre of the stream to emerge. This would also affect sediment transport in the river, and prevent erosion damage on the shores. Yet, more than 85 years later, his methods of river engineering still sleep in obscurity. It is as if we have not grasped the lessons he demonstrated on that spring morning in 1927.

This essay gives an introduction to Viktor Schauberger’s timber transport and river engineering – a topic I have been reflecting on over the years.

Read more about the log transportation in Olof Alexandersson’s biography on Viktor Schauberger, which also contains an introduction to Schauberger’s perspective on water management:

The principles of regulation of rivers with the aid of temperature gradients were published by Schauberger in series of papers in Die Wasserwirtschaft in the early 1930s. English translations of most of these papers are available in Callum Coats Eco-techology series (selected writings of Viktor Schauberger). See particularly: