Posted on February 1, 2013 by Lasse Johansson 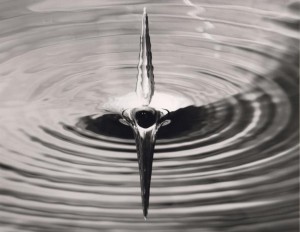 As if they were carved out, the ripples in the water hover before my eyes. The gentle vortex flow pulls the water down, only to return it to the surface again, following the walls of the egg-shaped container. Round and round, the water seems to form a complete universe of its own. It is unavoidable to be affected by the stillness.

Clearly, water can affect our thoughts. But can our thoughts affect water? Could, for example, our consciousness change a property or structure in a water sample? And could such a change in water be observed? This the Russian scientists Lev Pyatnitsky and V. Fonkin asked themselves.

When light passes through turbid water, the light now and then bumps into suspended particles or small gas bubbles, and is scattered. Such water looks milky, having a slightly whitish appearance from the scattered light. But even distilled water has impurities or inhomogeneities which cause some scattering.

Now, the Russian scientists argued, if there is anything like a structure in water, a change in that structure would affect how light is scattered. They decided to find out.

In a hermetically sealed vessel with distilled water, concealed in a container which was screened from electromagnetic fields from the outside, a ray of light would enter at one side of the vessel, pass through the water, and leave at the other side. Some of the light however, due to suspended particles, dissolved gas or some other structure in water, would scatter, leaving the vessel at another angle. Detectors were put around the perimeter of the vessel, to measure the amount of light arriving at the various angles, obtaining what is called a scattering spectrum.

Now, the test subjects, individuals of different age and background, one at a time, were instructed to concentrate their thoughts on the water in the vessel (which they could neither see nor touch).

And for several of the test subjects the way light was scattered in the vessel started to change. The scattering spectrum altered. The structure of water, as perceived by the light, had somehow changed.

Given the fact that living systems contain between sixty and ninety per cent of water, perhaps we should give the substance a thought?

If you like to have more details on the experiment, you can read the paper by Pyatnitsky & Fonkin in full (at the JSE web site):

A good introduction to light scattering spectra, and the main principles for inferring structure and size distribution of what causes the scattering, can be found in van de Hulst’s classical textbook from 1957 (reprinted 1981):

What causes the change in structure in the water sample, and thus the change in scattering spectra? And what is that structure? As with all reasoning with incomplete data, scattering theory has its limitations when it comes to what can be inferred – about size, form and distribution of the scattering structure. At present, we can at least conclude that there is a change in structure. If that structure comes from dissolved gas, from the bonding of the water molecules themselves, or from something else, remains to be seen.

Dag Birkeland, whose tranquil water sculpture illustrates this text, has been called a “water artist”. You can read more about his art here: