As the up-going flow bumps into the down-going, it starts to twist and bend. Botanical garden, Gothenburg, Sweden. Photo(s): Lasse Johansson

The jet of water ejects out of the nozzle in a continuous, steady flow. Directing my eyes towards the opening, there is not a trace of pulsation.

Yet just slightly above, the dance has begun. As the upward movement is gradually lost, the water jet starts to twist and bend, like a rubber band being pushed.

Then it turns around and sweeps down, now on this side, now on that, now hitting the up going flow and, for a moment, almost extinguishing it, and then it moves on again, unpredictable. Never at rest, oscillating, yet not repeating itself – its aperiodic undulations never reveal what is next to come. 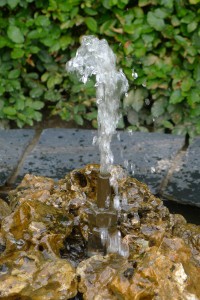 A jet of water leaving vertically, being pulled down by gravitation to interact with itself. As the jet reaches upwards, it starts to turn over…

Is that why we can stand absorbed, listening to the splashing sound, marvelling at the seemingly endless repertoire of shapes that water can muster?

A flow going upwards, and a force pulling it down on itself again, is all that is needed to create this vast complexity of forms. 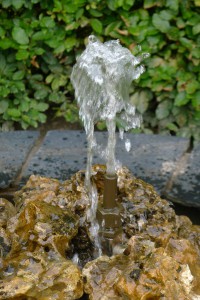 …collapsing into a cascade of forms when it falls onto itself.

For a moment the wind blows the flow sideways, disrupting the oscillation, the flow now merely describes an arc – like a water hose. And then back again, back to the dance – never at rest. 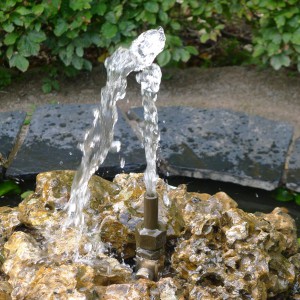 The dance is temporarily interrupted by the wind.

In the water jet we meet a free water surface along the flow, whose role is at the very core of defining the water jet’s behaviour. Trying to solve the Navier-Stokes equations for this kind of flow, an engineer will shake his head.

From some special examples, some insight may be gained, like the behaviour of a collapsing column of water, originally at rest. (Imagine a hollow cylinder, without top or bottom walls, filled with water and standing on a table, and then pull the cylinder upwards very quickly to release the water.) See e.g.:

But when it comes to grasp the dancing behaviour, we have to turn elsewhere. What we may be looking for is not necessarily exactness, but rather understanding of the emerging behaviour of the flow.

It is a lesson from chaos theory that complex aperiodic behaviour can emerge spontaneously out of simple conditions, and that often relevant aspects of that behaviour can be captured by very simplified non-linear models. Such behaviour is actually very common in nature. One could e.g. regard the oscillating water jet as a kind of non-linear spring, and capture some aspects of the vertical oscillation.

A classic introduction to chaos theory is:

For a more in depth coverage of nonlinear oscillations, see:

Similar, although not so spectacular, aperiodic behaviour can be observed in a dripping faucet. See the now classic report by Shaw (also referred in Gleick above):

Another example is a dancing vortex funnel, as described in my own research, see chapter 3 in the following report: