Posted on November 1, 2013 by Lasse Johansson 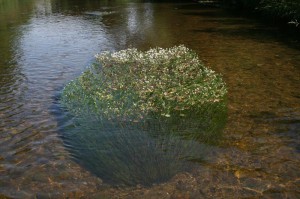 The Austrian forester and natural philosopher Viktor Schauberger (1885-1958) perceived many ways of altering a river’s flow, not by trying to steer water into a particular course, but by creating conditions for water to self-organize into a new flow pattern.

By altering the conditions, the river’s flow would effortlessly change into a new pattern. The flow would have a new structurally stable attractor, ever changing yet recognizable as the same.

In one of his inventions from 1927, Schauberger described introducing sloping logs at the outer perimeter of the river, causing the flow to be reflected inwards towards the inner curve, reducing erosion at the outer perimeter. In another invention, he considered introducing specially designed twisted guide plates in the flow, from which water would get an impulse to self-organize into longitudinal vortexes along the river course, increasing the river stability. And at other times the flow around egg-shaped structures in the river was investigated.

But particularly, Schauberger studied the role of vegetation and its effects on the shaping of river flow.

He observed that flow and river vegetation would interact, the flow and sediment transport affecting the conditions for plant growth on the banks and in the river, plant growth in turn affecting the flow and bank formation, the two forming an interlocking system where each affects the other and forms a structurally stable condition, which, he concluded, could be observed in untouched natural waters: “Here water in nature itself has shown the way it wants to follow – in order to have its optimal requirements fulfilled – and then we should respect its wish”.

Today, with more than a century of river engineering, pollution and large scale logging of virgin forests behind us in Europe, we have to search to be able to find river systems as untouched as those Schauberger studied. 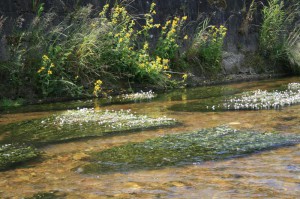 Studying Natura 2000 habitats of small rivers with floating vegetation in Poland, the polish scientist Wojciech Puchalski asked himself: “How would Schauberger see this habitat?”

Puchalski observed that the growth of various water plants species in the habitat would show a patchy structure, some of them could be described as almost egg-shaped, with an ability to shape the flow. “The habitat seems to function as a natural vortex generator in upland and lowland streams,” he noted – a factor relevant in the light of the fact that the habitat showed significantly lower bed erosion rate (up to ten times lower) in the river channels.

As a contrast, plant growth in more degraded areas, where human interaction had left more tangible traces, showed a carpet-like structure, different from the flow shaping patchy structure in the untouched areas. But reintroducing patchy growing plants in a moderately impacted river improved the flow patterns, and started to reverse the degradation, a natural river restoration that Schauberger would have liked.

Some of Schauberger’s ideas on river regulation can be inferred from his patents:

More background information on Viktor Schauberger is available in the Schauberger archives: