Posted on January 1, 2014 by Lasse Johansson 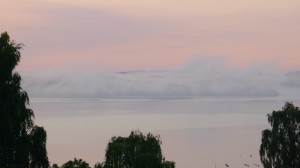 Clouds drifting off the coast at dawn. View from Orust island, at the west coast of Sweden. Photo: Lasse Johansson

Surrounded by mist, the tree covered ridges sleep across the water. Almost completely wrapped in clouds, the coast is waiting for the day to come. Slowly, slowly, the sun rises in the north-east, tinting the low-hanging clouds pink. Pale and yellow, gazing through the haze, it rises, starting to heat up the air, its heat being almost indiscernible.

The low-hanging clouds seem more sensitive though; over the next few minutes, they start to drift and dissolve. The dark jagged profile of the coniferous coast, blackish in the weak morning light, appears. The moist air, having condensed to water droplets forming the mist in the cool summer night, evaporates, dissolving the clouds in the process.

Of the rays of the sun, another thirty percent are being reflected by the clouds back into space. The rest are absorbed and heat the surface of the planet. Only a five thousandth is captured by the photosynthesis of all living plants on land, and all algae and bacteria that form the basis for the ecosystems in the seas. Yet, this five thousandth is instrumental in defining the climate.

As pointed out by the British scientist James Lovelock in the 1960s, the earth can be considered as a self-regulating system, with the living organisms forming a part of the climate stabilization – living organisms and geological processes form an interacting system, which defines them both.

Tropical rainforests remain stable because they maintain clouds above them, keeping the water in the ecosystem and reflecting away some of the heat from the sun. Otherwise, at their low latitude with its intense solar radiation, they would be stable arid areas. Increasing their temperature somewhat, their protecting clouds will drift away, and the rainforests dissolve – their cooling effect on the planet will be gone.

The small algae in the oceans bind some of the carbon dioxide absorbed by vegetation on the planet. But more importantly, they emit dimethyl sulfide into the atmosphere, forming the seeds from which marine clouds can grow, clouds that reflect away a lot of the heat from the sun, thereby regulating the climate. The combined effect is to cool the planet some estimated 6 °C.

The physical properties of water, however, define the boundaries of the algae ecosystems. As the sun heats the surface of the ocean, particularly above 10 °C, the surface water gets lighter and tend to float on top of the colder denser water at the depths below, no longer mixing with it. The top of the ocean becomes stratified. Soon the algae in the surface layer have consumed most of the nutrients available, and as they die, they sink towards the bottom, leaving a layer devoid of nutrients at the top, barren of life, making the tropical ocean clear and blue. Only where water well up from the depths below, particularly along the continents, driven by cold undercurrents originating from the poles, the surface waters of the tropics flourish.

In 1994, the scientists James Lovelock and Lee Kump made an important observation, looking at a model earth. If the absorption of heat increases on the planet, e.g. from increasing carbon dioxide in the air, algae and trees will try to compensate for the heating. But as the temperature increases, the warm surface areas of the oceans will spread, stratifying the water, decreasing the oceans’ capacity to regulate the climate. Finally, the active surface zones become so reduced that the climate regulation is left to the trees, and the temperature jumps upward, a condition which may well have prevailed during the warm Cretaceous period (100 million years ago).

Small differences in the density of water, insignificant as they may seem, call us to weigh their importance.

More details about James Lovelock’s perspective on earth as a self-regulating organism (the Gaia hypothesis), accessible for the general reader, can be found in his books:

Some papers (by Kump and Lovelock) that give pespective on the role of marine algae for climate regulation:

For a more general introduction to climate science, see: