Posted on September 1, 2013 by Lasse Johansson 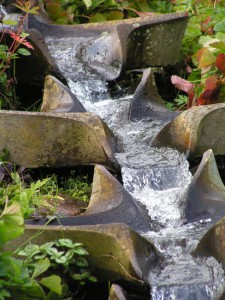 Swish, swoosh, swish, swoosh, in a rhythmic pattern, the water swings to and fro in the vessel, a “flowform”, originally conceived by the British anthroposophist John Wilkes (1930-2011) in 1970 and since then developed into many shapes.

The incoming water flow, and the curved heart-shaped walls create the right conditions for a rhythmic flow to spontaneously emerge, to self-organize – a cooperative behaviour, which springs out naturally, effortlessly, from the conditions. The water molecules dance together. From vessel to vessel the dance continues, until the water reaches the pond below. Standing by the stair of flowforms, listening to the pulsating sound, it is as if it radiates tranquillity – a wild brook carved in stone. 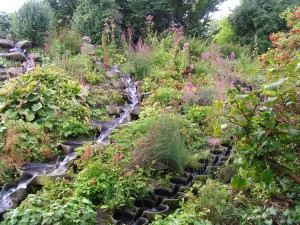 Part of the Warmonderhof experimental set-up, with flowforms of different types (from right to left): “Järna” model flowform, “Malmö” model flowform and (at the left corner) “Olympia” model flowform. The step cascade is outside the picture. Photo: Hans van Sluis

The water dance, created in the flow forms, has not only been used for its aesthetic qualities, but also for creating a better indoor climate, and as the last stage in the treatment of sewage.

Comparative experiments on waste water treatment in Warmonderhof in the Netherlands indicated a lower turbidity, better smell and more light-loving growth with better blossoming in the flowform system compared to a step cascade (where water flows over a flight of rectangular steps of stone). 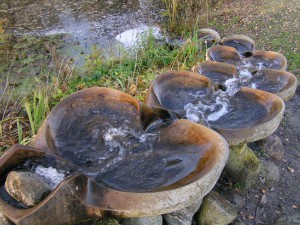 Could flowforms be used to improve natural waters? Well, fish are often attracted to the outlet and vicinity of flowforms – and they should know, shouldn’t they?

John Wilkes has written a good and beautifully illustrated introduction to flowforms. It describes the design process that led to the development of the flowforms, examples of different forms of flowforms, as well as many applications:

The experiments on wastewater treatment at Warmonderhof In the Netherlands have been described in detail by Hans van Sluis:

Research on flowforms is ongoing at Healing Water Foundation, a research foundation set up by John Wilkes:

Nigel Wells, a former student of John Wilkes, is developing flowforms in Sweden:

Martin Strid has written an interesting attempt to describe the pulsating flow patterns mathematically in his thesis on flowforms: